Nurminen's train service, which started in 2018, has transported cargo from Helsinki and Narvik in Norway to various destinations in China and back. Due to enormously increased demand, the company is now expanding its rail routes to Japan. The company announced the Japan route opening at the international exhibition TransRussia in Moscow on April 12.

The last train from Finland to Japan was more than 30 years ago. Nurminen Logistics train to Yokohama departs from Helsinki on April 15.
The journey of more than 10,000 kilometers starts by train from Helsinki to Vostochny port in Nakhodka and from there by sea to Yokohama. After China, Japan is Finland’s most important trading partner in Asia; timber, paper, machinery, and equipment are exported to Japan.

“This is a block train for one customer, but due to the high demand for exports and imports to Japan, we believe that more trains will start opening between Finland and Japan. The train transports products of a large Swedish company”, says Marjut Linnajärvi, Sales Director of Nurminen Logistics.

The second opening departed from Helsinki via Jinan to Tianjin, China, at the end of March and this full train service is part of Nurminen’s existing customer supply chain. Tianjin is a metropolis in northern China and one of China’s largest cities.

The third new route opened by Nurminen Logistics runs to Jiazhou, China, with departures from Helsinki every other week. The first export train to Jiazhou has already successfully reached its destination on April 6. Jiazhou is located in the Qingdao area, where there is a lot of industrial business.

“The demand and load of export trains are high, and we are very pleased that the Finnish export industry has included trains in its transport and supply chain solutions. Train transport is very suitable for products where the delivery time and reliability are important factors, or a lot of capital is tied to the product. Thanks to the direct route, regular departures and fast transport time, our customers significantly improve their own market position in China. Increasingly, low CO2 is also a significant selection criterion for many customers,” Marjut Linnajärvi says. 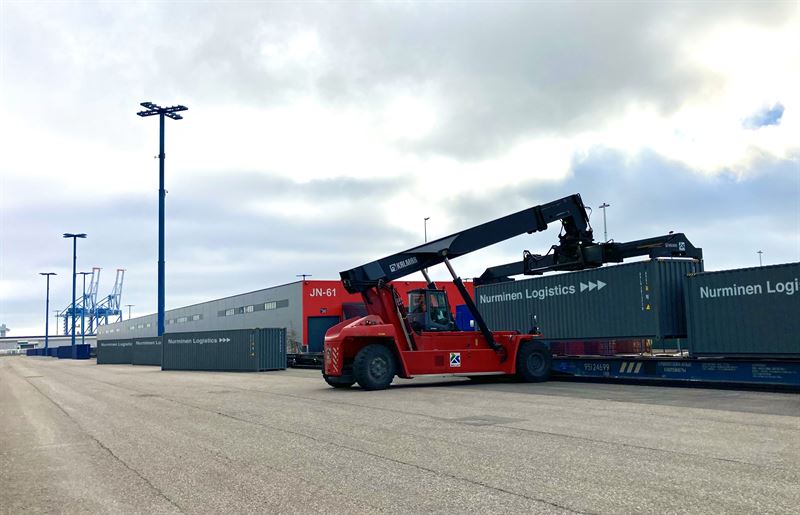